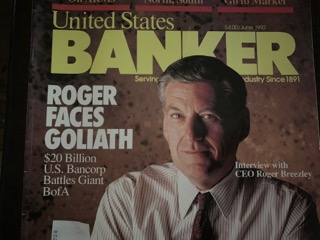 Roger Breezley was a 1956 WHS graduate.  After high school, he went to the University of North Dakota, where he graduated in 1960 and began his business career as a certified public accountant with the national accounting firm, Haskins & Sells in Portland. In 1968, he joined Moduline International Inc., Olympia, Wash., and played an integral part in the growth of this manufactured housing company from one plant in Chehalis, Wash., to 11 plants throughout the U.S. and Canada. In 1977, he joined U.S. Bancorp, Portland, and began a banking career that lasted until his retirement in 1995. He held many different positions as the company grew into a major regional bank holding company and was chairman of the board and chief executive officer at the time of his retirement.

He was very active in the business community and served on numerous corporate boards and business associations. He was also very involved in community activities and received many awards for his work with youth and in education.

He had a long-time interest in alternative energy and, after retirement, he was very active in the solar energy and fuel cell industry until his illness forced giving this up in 2001.
He was so happy when the Coyote Foundation was started so he had a place he could say “thanks” for the great education he received here. According to Del Easton, his first contribution was $1,500 and he gradually added money to that. He and his wife moved to Indian Wells, CA when he retired and he passed away there in 2005.
Scholarship amount: $500