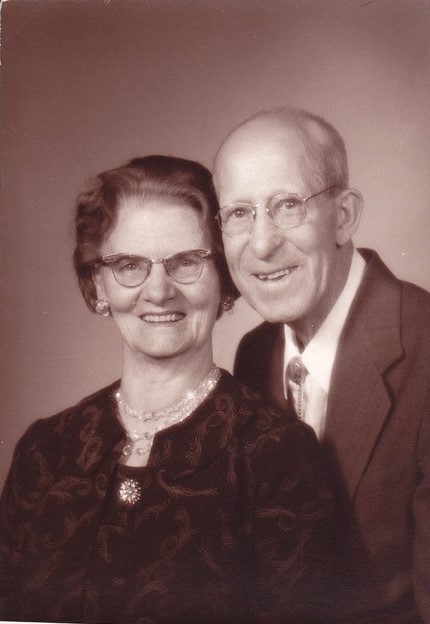 Alfred O. and Jennie Johnson Solberg farmed in Round Prairie Township, near the Montana border.

Alfred was born in Wisconsin on September 20, 1883. When he was one and a half years old, his family moved to Evansville, MN, where he grew up and was educated. As a young man, he moved to North Dakota where he filed on a homestead in Round Prairie Township. He received the deed to his land on June 20,1910. He farmed, built a homestead “shack” and worked for others in the neighborhood. He did not believe in borrowing money and was, therefore, the last farmer in the area to switch from horses to tractors. He  id buy one of the first Model T Fords in Williston for $500.

Jennie was born in Detroit Lakes, MN, February 12, 1888, where she grew up and was educated. She attended Teachers’ College in Moorhead, MN, and graduated in 1906. She taught school in Minnesota for ten years, then moved to Roosevelt County, Montana, where she homesteaded and built her own shack. She taught school in Bainville in the winter and rode the range for a large cattle company the rest of the year.

Alfred and Jennie were married in 1919 and moved her “shack” to combine with his “shack” in Round Prairie to make their first home. They had four daughters, Doris, Viola, Mildred, and Edith. They were actively involved with several groups and were influential in forming a creamery in Williston when large companies in the cities would not pay enough for farmers to make a profit. Jennie later served on the Board of Land O’ Lakes, a member-owned agricultural cooperative. They moved to Williston in 1945 because of Alfred’s health. Jennie was teaching at Round Prairie School at the time and finished the year.

Alfred and Jennie always stressed education and life-long learning. They were widely-read and shared their love of learning and reading with their children, their grandchildren, great grandchildren, and their friends.

The Solbergs were well known for their love of people. The coffee pot was always on and there was always enough food for anyone who stopped by. They loved to discuss politics, religion, and the state of mankind. Through example, they taught their children, grandchildren, and great-grandchildren about the importance of love and respect for others

Their granddaughters, Gail (Skogen) Migliorini and Valorie (Skogen) Babb have established a scholarship in their memory with the Coyote Foundation of Williston Public Schools. Because academics were important to the Solbergs, this scholarship will be awarded annually to a student who has completed 4 years of math and science and 2 years of foreign language.