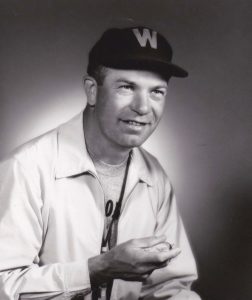 Mark your calendars for Friday, September 27th! 2019 WHS HOMECOMING festivities will culminate with the traditional parade and football game, but this year, there’s an added bonus that pays homage to the storied heritage of the Coyotes!

We are excited to announce that every year, at Homecoming, we will be honoring Coyote Legends on the field just prior to the football game. Thanks to a strong push from some Coyote alum to get the project going, we will be able to pay our respects and remember the outstanding tradition of excellence that came before us.

This year, our first ever Legend is H.L. Pedersen. Harold L. Pedersen was from Valley City, North Dakota. He was an outstanding athletic and student. He came to Williston in 1950, where he spent 13 very productive years. In his time at WHS, he was the athletic director, head football coach, track coach, basketball coach, and head wrestling coach. In fact, he started the wrestling program in Williston and was often referred to as the Father of Wrestling in North Dakota.

Check out this month’s newsletter to learn more about why so many people consider Pedersen to be amongst the greatest Coyotes to walk to halls of WHS during his tenure leading the football team and starting the wrestling team!

We will share more details about the ceremony in our newsletter, so stay tuned and plan on attending!

​​​​NOTE: We are currently raising funds to purchase a plaque and add signage to the existing football field.  If you are interested in knowing more about sponsorship opportunities, please contact us today!

As always, your donations are tax-deductible and very much appreciated. You can donate conveniently online or can mail any donations to our address listed below. We could not continue our mission of promoting and supporting Williston Public School District #1 without the help of our generous donors! ​