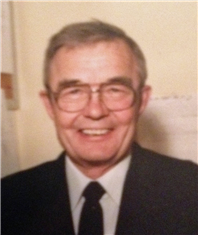 George Amsden, a longtime teacher, coach, and Coyote supporter, was a science teacher at the Junior High School beginning in 1957. George then became a physical education instructor at the Williston High School. He was the head football coach from 1963 to 1974. He then became the Athletic Director until retirement in 1989.

In his retirement he loved being with his grandchildren and watching their activities, always supporting the Coyotes!