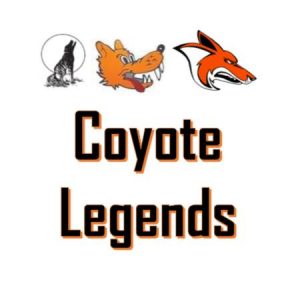 On September 30th, during Homecoming week, the newly elected class of Coyote Legends, along with the 2020 class, will be honored at a banquet at the Old Armory (formerly known as the Teen Canteen for many Coyote alumni).  The Heritage Committee is pleased to announce the teams, coaches, and individual athletes that will join Class of 2020’s Dean Hermes (posthumously), Ted Hopgood, and Garvin Stevens.

Tom Christen was at the helm of the Coyote wrestling team for 22 years, from 1975, when he was just 24 years old, to 1997. Tom guided 15 individual state champions and 85 state place winners.  He coached  the Coyotes to 177 dual victories, and seven top five finishes.  His 1985 team was the WDA and State Champions and named the North Dakota Sportswriters and Sportscasters Male High School Team of the Year.  He was named the 1983 North Dakota Class “A” Wrestling Coach of the Year and the West Region Coach of the Year in 1991 and 1997. Coach Christen left a lasting mark on countless student athletes during his tenure. Christen was described by one of his former athletes as a “master motivator” and respected and successful coach and educator.

The 1975 girls’ basketball team won the first-ever girls basketball state championship for WHS. With a record of 19-1, they topped off their season with a 47-35 win over the Jamestown Blue Jays to secure the crown.  For their efforts, Lori Anseth, Kristi Carriere, and Shelly Hughes were named to the North Dakota Sports Review All-Tournament Team. The 75 cagers were coached by Pat Hatlestad with team members Kristi Carriere, Julie Bisbee, Shelly Hughes, Marietta Falcon, Lori Anseth, Lori Sandaker, Claudia Hickman, Linda Alfson, Dawn Burk, Laura Javorsky, Dorothy Moline, Vicki Clark, and Alecia Fee. Their hard work and dedication set the tone for a run of 3 straight state titles.

The Coyotes led all North Dakota teams in postseason awards.  The ‘52 football team placed seven players on the Associated Press All-Conference Team.  Guard Garvin Stevens was named to the first team, and tackle Tom Stannard, guard Dave Korwin, quarterback Dave Tri, halfback Jim Webb, and fullback Jerry Miller, were named to the second team.  Back Duane Anderson was named honorable mention.  Stevens was named as “lineman of the year” and Coach Harold Pedersen was named “coach of the year.”  Stevens was chosen by the Williston team as “most valuable.”

Shelly Hughes Feeney was a member of the 1975, 1976, and 1977 state championship teams for the girls’ basketball squad.  She was a repeat first-team all-state selection in 1976 and 1977, and she was on the All-Tournament team all three years the Coyote cagers won the state title.  Feeney was also a two-time state champion in track and field, running a leg for the 880 relay and the mile relay teams who won the 1978 state championships.

Dr. James Webb, known by his teammates as Jimmy, was an integral member of the 1952 state co-champion football team, helping ensure the team’s success. After graduation, he went on to play college football at the University of North Dakota, including playing on the 1958 conference championship team and serving as team captain for the 1960 Fighting Sioux team.  Being an all-around athlete, Webb also earned the right to play on the UND baseball team during his college career.

Dave Stewart had an impressive run of 4 straight state championships in wrestling. In 1958, he won the title at 98 pounds. In 1959, he placed first at 105.  His junior year, he jumped up to 112, securing the championship, and in 1961, he wrestled at 119, and completed his run of 4 straight individual wrestling championships. Stewart finished his Coyote wrestling career with a remarkable record of 100 wins, 2 losses, and 1 draw, before heading off to wrestle at Minot State Teachers College, where he had similar successes, including being a three-time college conference champion.

The Heritage Committee is made up of representatives from the Coyote Booster Club, the Williston Coyote Foundation, and WHS administration, as well as community members at large. The goal of the committee is to recognize the Coyote Legends, whether teams, coaches, or individuals, who have had a lasting impact on the school and community. At this time, the committee is focusing on nominations received for the worthy candidates from farther back in history, but they will accept ALL nominations and will reevaluate them each year for those who may not have been chosen in the year they were nominated.  If you would like to nominate a Coyote Legend, you can do so by going to the Williston Coyote Foundation website:  www.willistoncoyotefoundation.com and selecting the Coyote Legends tab.  Please consider submitting a nomination for a Coyote team, coach, or athlete who should be considered LEGENDS.